Defining a Spiritualution—a Spiritual Revolution—In Reference to the 99% Movement and Occupy Wall Street. What the People Must Do to Win Over the Power Elite.

Firstly, whenever the poor and disenfranchised—who were abused for years—took to the streets, they were hosed, attacked by the police dogs, beaten with sticks, and pepper sprayed. But now this new 99% movement is not just a movement of poor blacks or other minorities but a combination of white and black races as well as yellow, brown, and red. It is a true racial coalition that has representation from 99% of the population.

Now the children of the once middle-class parents are speaking out and protesting because they have huge student loans to pay off and cannot get jobs. Where were they when they were not as much affected by the greed and power control of the elite?

People need more money because they live unsustainably. You would be surprised how cheaply you can live by practicing common-sense sustainability. The 99% movement has to become synthesized in moral and sustainable standards and adopt those higher standards themselves so that they can “sell” it to the rest of America and the world.

As Gandhi (and many other true change agents of history who have also been spiritual voices for humankind) said, “You have to be the change.” The millions of India did not listen totally to him. As a result, the country was split into two countries—India and Pakistan and are bitter enemies. Both countries have become all about the dollar bill and materialism, as most countries are. So, even though the English government conceded power to the native Indians, it still holds control over India and Pakistan through their own corporate form of Wall Street.

Writing new policies that our governments should adopt—like campaign reform, universal healthcare, and universal education—would be just the beginning of making substantial and much-needed change. But none of these bills that the 99% movement may get passed will work unless there is a universal Spiritualution movement, a change of consciousness, by the tens of thousands and millions in the 99% movement themselves, because the power elite will not let go of their dio (evil) power easily. They can only be defeated by a higher moral force or a national moral consciousness, a Deo (goodly) power, and then hopefully an international moral consciousness.

A bill passed will not change the consciousness of a people. People cannot be forced by law to totally obey a dictum by the state. The Emancipation Proclamation freed the slaves, but for more than one-hundred years after that proclamation, the majority of the whites still looked at the blacks as inferior, because the whites themselves were morally inept and taught racism to their children through their outspoken beliefs, racist laws, and brutal treatment of “those of color.”

If the state does adopt a moral dictum or law, people may seem compliant publicly, but privately they will still rebel against a correct legislative moral bill. They will rebel against a higher moral standard that they themselves have not risen to in consciousness.

We cannot divorce the Creator from this 99% movement. We must bring the Creator in more, because the Creator—in the consciousness of sentient freewill beings—is the author of moral standards. Moral standards are the first step towards spiritual consciousness, but the soul and mind must go further. The Creator does not want you to obey any of His commandments or moral standards just because it is the law. Many people disobey many of His commandments and moral laws, even though those standards of right and wrong are present in both the laws of the state and in their conscience.

The Creator wants you to do what is the right thing to do because you know it is the right thing to do, not because you have to do it. The Creator does not want robots in Paradise with Him. He wants a loving family who all together honor the Father who created them and each other. That is how some aspect of Paradise is created anywhere in any culture on this world. Unfortunately, many people disobey their own conscience that the Creator put in our hearts, minds, and souls to protect civilization from our lower selves.

The Creator does not want you to join a building (called a church) of dead, lifeless stones. He wants your foundations of faith to be built on the premise of love in the living waters of unity with each other. That is the “church” that Jesus was talking about.

Here is a ten-point solution to break down the unethical practices of Wall Street, the power elite, and the banks, as well as corruption in our government and injustice to the poor and disenfranchised. Basically, the whole greed-driven system needs to come down, and this is the way. Not by violence but by millions and millions of people—not only in this country but worldwide—taking part in this Spiritualution movement, a spiritual revolution and solution.

You must find people who have joined in the Spiritualution movement and come out of the fallen system. In this way, all of you will be in the divine mind together. The Creator will say the same thing to you that the Creator will say to the elder and vice versa. The elder is there to confirm the voice of the Creator inside you, concerning any matter. The Creator will talk to you first. Often you may not want to hear the voice of God inside of you, and the elder then has the responsibility before the Creator to try and guide you in the Creator’s direction for you. But a true leader can use no coercion to force you to go in the Creator’s direction. Unfortunately, many so-called leaders—spiritual and otherwise—use all kinds of coercion. These false leaders you must run from and not give them any power over you. But the leaders who are your fatherly examples find and treasure. 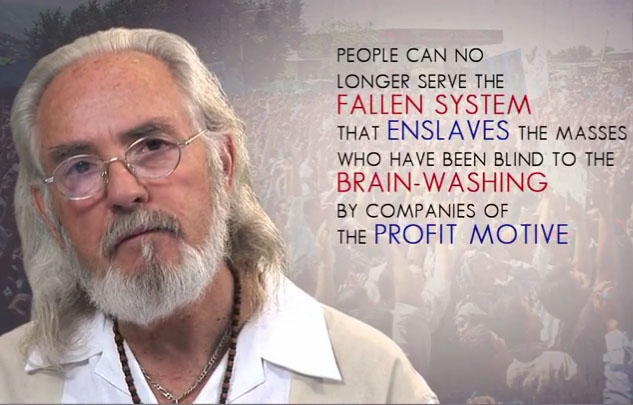